He's Not Real You Little Twat

We've already been booked for a few shows next year! They include The British Wildlife Festival 6 in Leeds, The Caretaker Album Launch, The ArmaGedd'on! Festival in Plymouth and a one off show in Paris. We are also booking a tour of UK and Ireland with Love Among The Mannequins for 30th March to 8th April.

The split with Clean Kitchen is coming along nicely, we found another label to put it out [Count Your Troubles Count Your Blessings Records]. We are just finalising artwork and waiting for the masters. Not long now...

Death Pedals recently released an EP, it comes as a poster with a download code. It's a shit idea but it is great poster and the EP itself is mint. The download can be bought from here - http://deathpedals.bandcamp.com We got asked last minute to play their launch show at Scar Studios in Camden, Yokozuna drummer Russell Taylor videoed it


While I'm plugging stuff, buy these
http://music.caretakerband.com/album/providence - It's not officially out yet.
http://nitkowski.bandcamp.com/album/stay-in-the-home-you-love - It's officially out now.

Have a great Christmas, see you in the new year. x
Posted by Russell Whitehorn at 22:07 No comments:

We got back home from our European tour last night, a massive thanks to EVERYONE involved. It was proper mint! 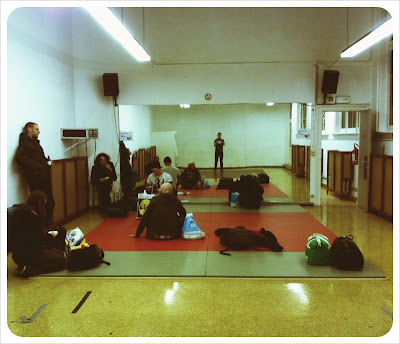 Posted by Russell Whitehorn at 21:15 No comments: