This is part 1 of 4 of our set at Bar'hic, Rennes. If you fancy watching more then you can click on the Youtube button in the bottom right.

Posted by Russell Whitehorn at 21:53 No comments:

Mann Not a Boy

Phil has been tattooing for over a year now and plans to eventually quit his window fitting job to do it fulltime.  He has been very busy tattooing in his spare time; He has been doing it on Saturdays, and sometimes, three nights per week. If you are interested in getting a tattoo yourself, please have a look at, and LIKE his Facebook page. He also has a blogspot account, but I'm not sure it will be kept up-to-date as much as the facebook page. 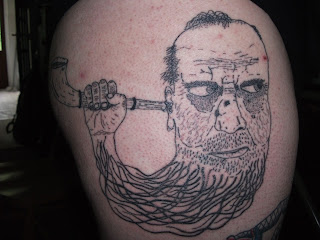 Posted by Russell Whitehorn at 13:54 No comments:

We've been back from tour for a week now, which means that we're are all back at work. We met a lot of new people, played at venues we had never been to, saw towns we would have never have thought about visiting on holiday, toured in Spain for the very first time, and discovered that Gareth gets very ill on 19 hour ferry crossings. Ferry sickness aside, we had a brilliant tour. We also played with a lot of very good bands, here are a couple of my favourites.

ChooChooShoeShoot (when hearing them pronounce their name, it came to my attention that the idea is to say it in under a second). We played with these in Rennes at Bar'Hic.


Action Beat. We played with these boys in both Caen and Barcelona. They are from Bletchley, which isn't in Milton Keynes.

My intention is to post a few more of the bands we played with over the coming days.
Posted by Russell Whitehorn at 17:06 No comments: